At times we fill those shoes up that we never want to. Contributing to global pollution is more or less comes in that segment too. Doesn’t matter how much we’re using the safest energy yet we’re somehow adding up to the pollution every single day. Even the rides we’re driving are a clear example of that.

They’re releasing tons of harmful chemicals every time they’re rolling on the street. But what if you’ve had the chance to change it. This Bosal Catalytic Converter Review is all about that. If you’re familiar with the catalytic converter, then I hope you already know how good they’re at minimizing the pollution.

So, I thought of getting you a review over some of the finest Bosal Catalytic Converters. After all, they can let you contribute more finely at minimizing the emission of harmful elements.

Bosal doesn’t only believe in making products, but literally perfecting them. They’ve tried the same on catalytic converters too and came out with 3 amazing results. Let’s check them out, may we? 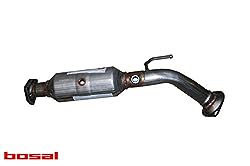 This amazing catalytic converter is capable of reducing hydrocarbon emissions by more than 80%. If you ask on the carbon monoxide, then it can minimize its emission as well by more than 80%.

Another highly harmful element that your releases every day is called nitrous oxide by 62% during the expected life of a vehicle. So, this time you can call your car everything but not a pollution machine.

This piece won’t be messing with the vehicle’s sound either. You can have the right ‘Noise’ just like as usual. Another good thing about the Bosal 099-1107 is, the heat shield won’t be mounting back up to it.

To keep it all at the level of convenience, it doesn’t come with a complicated installation process as well. So, you’re making your mind grabbing one of these, then you can be sure it won’t cause you much of a sweat while getting installed.

As it weighs only 6.24 pounds, at the time of installation the weight will be the last thing that can create any problem. The lighter, the better, remember? 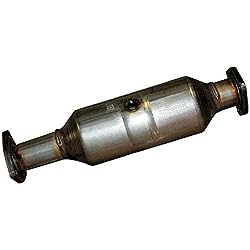 Bosal is so focused on making your rides pollution-free that they’re giving it more effort to build finer catalytic converter. So, as a successful attempt, they’ve come up with the Bosal 099-3723.

The primary responsibility of a catalytic converter dealing with Hydrocarbons, Nitrogen oxide, and Carbon Monoxide. The 099-3723 is designed in a way that it can keep stop your engine from throwing all these toxic gasses out in the air.

Along with that, it converts these toxic gases into a positive one, which ultimately helps the environment. The first one on that list is the carbon monoxide. It converts that into carbon dioxide and we all know how that’s going to help the trees.

Now let’s come to the nitrogen oxides. As nitrogen oxide isn’t on the list of friendly elements for the environment, 099-3723 simply breaks it down. It converts that into two different elements, one is nitrogen and the other one is oxygen. Now you tell me, can that make any harm to the world anymore?

The last one remains on the list is the hydrocarbons. This piece converts them into water and carbon dioxide. So, there will be no gas that’ll come out of the exhaust of your car to cause global warming anymore.

A catalytic converter is meant to do a lot within a vehicle and all of them are nothing but positive changes. But if you get one the can’t keep it to that level, then it’s equivalent to a pure waste of money. So to save you from that, Bosal has brought the 099-2681.

Like the look, this bad boy is ahead with a solid performance as well. Just like any of the best catalytic converter, it can stop your ride for leaking any harmful gasses. As you know, how badly carbon monoxide can affect the lungs. By converting them into carbon dioxide, it doesn’t only save your lungs but the environment too.

It does the same to Hydrocarbons as well. It converts that into two different elements, water, and carbon dioxide. I hope you’re not unaware of the usefulness of these two elements.

As Nitrogen oxide is another way of the vehicle to gift the environment with pollution, 099-2681 takes care of that too. By breaking it down into oxygen and nitrogen, it converts your four-wheeler into a safer machine to the atmosphere.

Rather than making it any more complicated, Bosal has built it with the one-piece configuration. The best thing about that is, now won’t have to go through any hassle in installing this 5 lbs catalytic converter in your ride.

Initially, it looks like a costly initiative to have a catalytic converter. A lot of the automakers even believe that’s can make the cars prohibitively expensive. After all, they boost up the cost by 2%.

But you’ll be amazed to hear the estimation from Environmental Protection Agency. They think a catalytic converter can save your money 10x than you’ve invested to get it. Now you can easily assume that why getting you the Bosal Catalytic Converter Review wasn’t a bad idea. All the best with your next one!