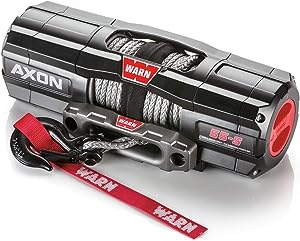 After completing an in-depth analysis of the Warn VRX Vs Axon winch debate; I’m going to vote for the Warn Axon series without any second thought.

It’s because Axon series beats the VRX series in terms of features, performance, and winching capacity.

Having a rescue unit in the back of your ride is a very wise thing to do. As you know, accidents can happen anytime so it’s good to be prepared. I am talking about a Winch to be clear. It is an excellent piece of machinery to have.

Warn is a renowned brand in the winch industry. They have some beautiful series of winches to pull out the different winching job.

Today I am going to introduce you to 2 of their very popular series of winches. The Warn VRX and The Warn Axon. They are the upgraded version of 2 of the previously popular series Vantage and ProVantage from Warn.

Actually, if we compare those old and upgraded series, we can see that Warn only used 3 parts from the Vantage and ProVantage series to develop this new one.

If you decided to compare these two series, then you made the right decision.

You can easily guess that 2 different series will have some differences in features. And that’s exactly what I am going to point out first.

Later, I will review a couple of products from each of those series.

The individual features and insights will help you in your decision-making process.

The similarities between Axon and VRX series:

That’s all the major differences and similarities between those two winch series. Another similarity is that both series winches are fully sealed.

Warn VRX series is fully focused on pulling out small jobs. They work best with ATV / UTV/ Truck / SUV. This winch series comes with a pulling capacity between 2,500 to 4,500 lbs. That tells you about their size too.

Yes, they are small in size. That’s why you can fit them in a compact space like in the back of your ATV.

I have got 3 products of this series that I will review here. They are VRX 25, VRX 35, and VRX 45. But, first, let’s know a little bit more about this winch series, shall we?

Some common features of the Warn VRX series:

Another interesting part of the VRX series is its price tag. Considering all the features and quality performance they offer, it is a bargain at that price. 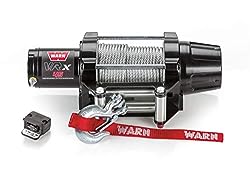 Warn 101045 is an amazing choice for a heavy pulling job. You can’t go wrong with this one as Warn has a very good reputation in the winch industry.

To get the best performance from this one, make sure your vehicle’s gross weight is not more than 3,000 lbs.

It comes with a 3-stage planetary gear train to withstand higher load capacity. They used a mechanical load-holding brake which is much more reliable than a spring brake to control the towing operation.

It comes in two different rope versions. One is a heavy-duty steel cable that comes with a roller fairlead and the other one is a lightweight synthetic rope with hawse fairlead. That matching fairlead with cables is a nice touch as they work best in that way.

It comes with both a corded remote control and a dash switch.

It is completely sealed to be dust and waterproof with an IP68 rating which is the general case for every winch of the VRX series.

The price range of this one is very affordable and that makes it an even more interesting choice. 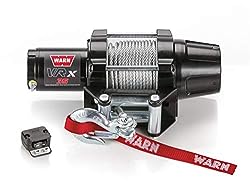 Another budget-friendly versatile winch to retrieve your Powersports vehicle safely is the Warn 101035. The gross weight for this one should be equivalent to or less than 2,333 lbs.

The automatic load-holding brake and planetary 3-stage gear train like the previous one can make it easy for you to control the towing process.

50′ long steel cable or synthetic rope is the decision you have to make. I think that both are solid in their job and of good quality.

It also comes with a dash-mounted control switch and a corded remote control. 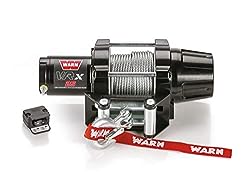 The last one of this series is also the lowest load capacity one. The Warn 101025 has a pulling capacity of 2,500 lbs so it is fair to say it’s suited for smaller jobs.

All the features of this one are exactly the same as the previous two I reviewed. They are almost identical except for the load capacity.

Oh, and the price tag. The lower the capacity, the less the money.

This one is another series from Warn that can be considered as a powerful workhorse. This workhorse series is built for heavy-duty Powersports towing jobs.

Just like the previous series, I will review 3 of their top-quality products. The Axon 35-S, Axon 45-S, and Axon 55-S. First, let’s discuss the common characteristics of this series.

The common features of the Axon series include:

Fortunately, that’s the end of the downside list. There is no other major lacking found in this series.

The digital control is a really nice touch by Warn. Because of that, you can monitor the load all the time and that will save the winch from being overloaded.

The model of this series is a bit expensive. But given the features, it comes with and the performance it provides, that pricing is reasonable. 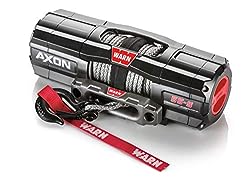 The use of the Motor (magnet motor and contactor works as one unit) is a nice addition to this series. It makes the installation part much easier by removing the need of using many wires.

It comes in two different rope versions. One is a lightweight 50′ long synthetic rope with hawse fairlead and the other one is 50′ heavy-duty steel cable with a roller fairlead.

The package includes all the control systems such as a dash-mounted control switch and corded remote.

It is equipped with a 3-stage planetary gear train, IP68 waterproof rating, and automatic load-holding brake. Plus, it has a load limiter that shows how much load the winch is handling.

It’s a good option for those who don’t have any problem with synthetic rope.

Now with some reduced power, Warn offers Axon 101140 with a maximum pulling capacity of 4,500 lbs. Keep the gross weight range around 3,000 lbs to get the best output.

This model also comes with synthetic rope and steel cable version. All the other features are also the same as the Axon 101150 winch. 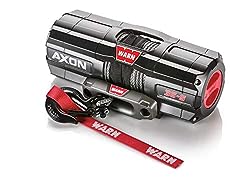 This one also features both synthetic and steel cable version. Most features are similar to the previous 2 I reviewed.

Both of the series have their pros and cons. I tried to keep the whole detailing part as simple as possible to save your time.

Now if we look closely, we can see that the Axon series offers improved performance, features, and winching capacity. But it also cuts a big hole in your pocket. Plus, it has both the steel cable and synthetic rope versions available.

On the other hand, for a less amount of money, the VRX series offers almost as close performance as the Axon. Obviously, there are some features unavailable in this series compared to the Axon series, but it will save a lot of your money.

So, for those budget shoppers, VRX offers the best options.

That is my opinion, of course. You should buy the one that fits your requirements and budget.

I also prepared some guides as well, such as truck winches, car hauler winches and hitch mount winches. I spend my spare time writing on this website, OffRoaders World. I share my thoughts and reviews on different types of gears, share tips sometimes. This website is specially created and regularly updated basically to help other folks like me when I started to solve the various problems they face, specially when they go off-roading.